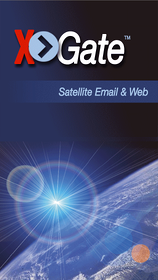 Now,  you can post to Facebook, LinkedIn and Twitter from your iOS (iPhone, iPad or iPod Touch) or Android (Google Nexus, Samsung Galaxy, etc.) via a Wi-Fi enabled satellite data connection, or any data sevice running on your device. The new service is free to all XGate subscribers.
Simply download the app, enter your User ID and Password, and follow the directions to set up your social media accounts.
XGate iOS App: https://itunes.apple.com/us/app/xgate/id490417552?mt=8
XGate Android App: https://play.google.com/store/apps/details?id=com.globalmarinenet.xgate&hl=en

“Facebook, LinkedIn and Twitter are the way millions of people share their lives with others every day. Yet until now satellite phone users, who are often in the remote places or emergency situations where they most want to update others of their status, have found it hard to post to social media sites,” said Dr. Luis Soltero, President and CTO of GMN.

XGate offers email, web, weather, and now, social media services, designed for the unique needs of satellite data users. Satellite data feeds are significantly slower and/or much more expensive than most cellular data services, but have the advantage of working in places and times where cellular networks are not available. XGate uses three to twenty times less data for each of its services than standard email, web, Facebook, LinkedIn and Twitter apps, saving satellite users time and money.

To access XGate services, users simply need to connect to a Wi-Fi enabled satellite data feed, as would be found on a marine vessel, or created by a device such as the GMN Optimizer Satellite Firewall and Wi-Fi hotspot. XGate will also work over cellular data networks, allowing customers to use a single app regardless of network, or to save on cellular data usage charges.

Facebook, LinkedIn and Twitter updating are available to both new and existing users for standard XGate subscription rates. Existing XGate subscribers can download the latest version of XGate in the XGate downloads center. Currently, XGate Social Media services are available for all users of the following Windows, Apple Macintosh and Linux versions:

XGate works with any IP-based data service, including the following satellite phones.

Global Marine Networks (GMN), the leaders in advancing satellite data speeds and services, helps Fixed and Mobile Satellite Services providers and their customers by offering the industry’s fastest, most reliable and easy-to-use E-mail, web, and other hardware and software services to maritime, oil and gas, first responder and business continuity users. The company’s products include XGate high-speed satellite email, WeatherNet weather and oceanographic data software, and vessel tracking systems. Ship to shore network management solutions are sold by GMN under the RedPort Global brand name at http://www.redportglobal.com and as white-label solutions for the world’s premier satellite data service providers.

GMN has numerous awards and certifications for technical innovation and holds pending patents on its products. For more information on how GMN is Making Airtime Count™ - whether ship to shore, or in remote or emergency communications environments visit www.globalmarinenet.com.

To see XGate in action, take advantage of the free 3-day trial by clicking the button below. No need for a satellite phone to try out XGate, just download it onto your computer and test-drive XGate today!